a filament of spider silk throws the light so finely that a strand appears to lack depth and a single and exact location in space. just as finely, the spider, hanging on the end of one of the hoya’s new vines, was throwing the silk. a familiar motion of limbs (like a fisherperson picking up their net in order to toss it off the side of their boat, or someone picking up several skeins of yarn off the floor and holding them all at once, or someone collecting laundry into a ball) as it gathered up silk to cast. it held one of its long second legs up over the rest of its body; it circled this leg in the air slowly and gracefully. some inches to the left, a curve of light unfurled, glowed bright for a second, and disappeared.

sometimes, when I’m having a hard time laying my thoughts out or following them from one point to the next (which agitates me; when my faculties suddenly aren’t available to me as much as they had been, I begin to ruminate on hopelessness, which further agitates me), I walk into the woods. it’s easier to spend more time there when there’s another reason to do so, so I grabbed the ax and a cardboard box to put the wood in and walked until I found a cluster of downed branches and trees and somewhere dry to put the box down. the storm the day before brought down a lot. the leaves the color of peach flesh blanketed everything and were wet and soft. the smaller branches I snapped in my hands or with my boot. I wanted to swing the ax. I needed to do something physically demanding and impossible for me to get obsessively confused by. I needed to do something helpful and rhythmic.

some of the wood is too soft, too crumbly. when I touched it, it powdered and left dust on my hand or sleeve. some of the branches I picked up surprised me by being green inside. but there are plenty of trees suitable for firewood. one of the trees lying on the ground had good-sized branches in the air. I focused on a spot near where the branch started but not too close to the joint and brought the ax in an arc behind me, up over my shoulder, and down. I took a chip out and left a notch. I couldn’t hear the chop—I had earbuds in, and shuffle was lining up “Furnace Room Lullaby,” “What Kind of Man,” Tori Amos, truly music to swing an ax to—but I could feel it when the ax landed. I felt the swing, the point in the arc when I hitched the ax so it would face the right way when I brought it down, the burn in the part of my palm where the handle was rubbing. I felt when my foot slipped on the slick leaves, saw the little area of dirt I uncovered and the big worms I exposed to the colder air. the branch fell into a cradle created by another branch and a living tree. I split it into small logs and lobbed them into the box.

peace. the word came to mind and spread out there.

spread across the kitchen table are mid-20th-century psychiatric texts, a medical dictionary published five years before chlorpromazine was synthesized, Last Resort: Psychosurgery and the Limits of Medicine (1998), a Merriam-Webster thesaurus, the Chicago Manual of Style, 15th edition. between them and the laptop is a cup of coffee, probably my second or third.

I decided to write about the language of neuroleptics and discovered that it’s impossible to relay what I want to relay without addressing the modern history of psychiatry. does the excitement about chlorpromazine make sense if I don’t mention that improvement referred to tractability or that CPZ arrived just in time to meet the demand for an intervention less ablative and more scientific-seeming than psychosurgery? I decided that medical terminology is an interesting tack to take, a good way to organize information. I titled the something I’m writing “An Antagonist by Any Other Name.” on the laptop I’m switching among scholarly articles, trying to build in my mind an accurate context and then trying to communicate it to other people. the bordertime between medicine’s Heroic Age and its Scientific Age—psychiatry, the lagging medical specialty, needing to prove itself—the institutions full to bursting, the institutions having to turn away the more-profitable short-term inmates because the long-term inmates were occupying the beds—the first bubbles of civil unrest on the way to boil. there are incongruities in the accounts. I’m rereading things without making any new connections. all day the information hasn’t been clarifying itself into sentences. there is so much in my head. I obsess over using punctuation most effectively. it’s a familiar obsession, and I can’t lift myself out of it. I’m worried that I won’t be able to keep this thing linear. a drug that would keep me on task—that I would take and love. I have to stop when I can’t remember what I want to say, but I don’t want to stop—never mind that I never really got started—so I scroll back and forth through the PDFs two more times, leave the table and the computer, move around. maybe reheat the coffee or get more, maybe make lunch. I sit down again.

I change the topic. I can fine-tune the presentation I’ll be giving to the Women’s Group at the LGBTQ Center. one of the works I’m citing is a podcast episode. I skip through it, listening for the relevant part so I can transcribe it. I add time stamps and the transcribed sentence to the entry in the reference list. still, the punctuation marks stand out accusingly, the words fading into the background.

a small bird appears on the other side of the picture window, on one of the azalea’s more-exposed branches. it twitches constantly. its coloration looks bilayer, solid yellow laid over gray-brown. when it moves and blurs, or from farther away, the effect is slightly warmer than olive. it’s sleek when small birds are normally round this time of year. it’s looking at me hard and cheeping angrily, which I only barely hear through the glass. every few seconds I see a flash of bright-red crest. whenever it sits still enough for me to get a better look, there’s no crest, only a smooth, yellow-on-brown head. but I keep seeing it—it’s so red—and, after considering that it might be in my head, after deciding that it would be a pleasant hallucination to have, I remember such a bird in the birding book. I even remember part of a name: ruby-crowned something. the guide tells me ruby-crowned kinglet (Regulus calendula), 4 ¼ inches long. this one is littler.

Public entry. Anonymous commenting on for those who want the option.

Becoming 'Whole' Again: A Qualitative Study of Women's Views of Recovering From Anorexia Nervosa
Jana Jenkins and Jane Ogden
(thanks again to

A BILL
To amend title X of the Public Health Service Act to prohibit family planning grants from being awarded to any entity that performs abortions, and for other purposes.

This Act may be cited as the "Title X Abortion Provider Prohibition Act".

—The PDF of H.R.217 via The U.S Government Printing Office. An HTML version is available through the Library of Congress's THOMAS Web site.

Rep. Mike Pence (R - IN) vehemently opposes abortions. It has been pointed out that anti-choice, anti-abortion legislation and rhetoric are misogynistic: they slut shame (police women's consensual sexual activity and women's sexual interests, disproportionately more than men's); tell women that our lives already in progress are worth less than the potential lives of any and all of our possible offspring, that is to say, reduce our existence to breeding purposes; and they are indicative and representative of women's overall standing in a society as a socially minority population (which is why all women, regardless of individual likelihood, ability, or inability to get pregnant, get to speak on this matter, while men generally need to fall back, as men's minds and bodies are not the recipients of nearly the same level of disrespect). It has been pointed out that calling anti-choice, anti-abortion legislation and rhetoric "pro-life" is a farce unless you think of existing women's lives as disposable, and it has been pointed out that "pro-life" persons frequently support, say, the death penalty. Maybe Pence did not get the memo; maybe he got it and chose to ignore it. H.R.217 went to the House of Representatives January 7 and has sat around doing nothing since.

Congresswomen Jackie Speier (D - CA) and Gwen Moore (D - WI) took issue. Watch Speier speak here about shaming in anti-choice legislation and her abortion and Moore speak here about classism and racism, via Minority Leader of the House Pelosi's channel. (Moore: "I am really touched by the passion of, uh, the opposite [anti-choice persons], you know, to wanna save black babies.")

If you have gotten this far and are still capable of rational thought and speaking or writing in a respectful voice, please call (preferable) your representatives and senators or e-mail them (next-preferable). Incapable of rational thought or speaking or writing in a respectful voice? Me too! It has taken me a few hours to write this damn entry, and I'm still not sure it makes sense. Planned Parenthood has drafted an "Open Letter to Congress," which you can read and sign here. I believe any US resident can fill it out and send it. If you aren't a US resident, please try and let me know if it goes through?

I have had TWO vivid vivid but thankfully brief smell-memories of raw lamb kidney in the last two days, oh my God why. It smells so much worse in retrospect

I bought a lamb kidney at Adams because it was 28 cents.

Now what do I do with it.

(Dana suggested I throw it at someone.)

I am reading that lamb kidney's best applications are stew and chili, which means the meat is not good on its own (according to a recipe I am about to link, the "extreme" and "arresting" pungency of lamb meat drowns out the urine smell) and must be made good with other foods.

This recipe looks promising (and I would have to adapt it), but am I reading this correctly:

my body must have missed the memo that orgasm brings calm

body, what are you doing

I called one of three of Dr. Ackerman-Raphael's office numbers today.
"We're sorry, calls from this account are currently restricted…." 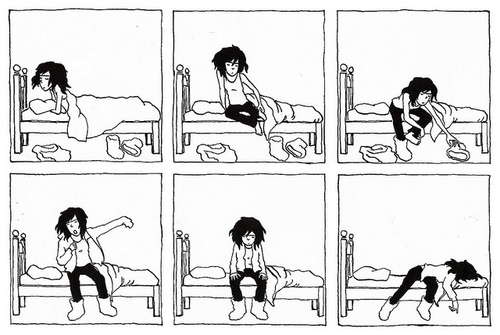 Emily has officially moved in with Mom; I say officially because she lives there and I have inherited all her furnitures. Four dressers! Two desks! I am living the American Dream.

The secretary desk (similar to this) does not have a footrest. Most desks don't. A travesty, if you ask me. I like to prop. I found a way around this:

ETA: Emily left stickers in the desk! I am gonna use the shit outta these.

It took three phone calls, but MVP corrected their error. I am insured.

1. E-mail Geraldine. In the morning, so she doesn't think I keep weird hours.